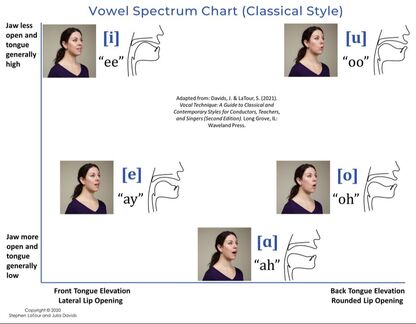 Each vowel requires a slightly different configuration of the tongue, jaw, and lips to create the right resonance space. Many singers do not understand how each vowel should be created. Often, they fail to differentiate the vowels sufficiently, resulting in a lack of tonal color variation and reduced intelligibility. Vowels are just as important for intelligibility as are consonants.

We refer to the progression along the roughly U-shaped curve in the illustration from [i] to [u] as movement along the “Vowel Spectrum.” Vowels next to each other on the Vowel Spectrum are produced similarly. It is easier for singers to develop a sense of how a vowel should feel if they can relate it to a close-by vowel because they do not have to deal all at once with the multiplicity of variables that differentiate the vowels.

Try the following exploration of the Classical Vowel Spectrum, using the illustration as a guide to tongue and jaw position: Place the tip of the tongue at the base of the lower teeth. This should be the resting place for producing all vowels. Start by singing [i] in the middle of the range with a slight smile. The hump of the tongue should be elevated forward in the mouth. Then, open the jaw a pinky finger’s width between the molars and sing [e], with the hump of the tongue moving back somewhat and decreasing slightly in height. Allow the arch of the tongue to move back further and reduce in height to sing [ɑ], allowing the jaw to open a little more. Next, increase the height of the arch and round the lips to form [o] while closing the jaw slightly. Finally, increase the height of the tongue a bit more, move the arch slightly forward, and close the jaw to the starting [i] position to sing [u]. While an oversimplification, this can encourage a unified understanding of vowel formation.

In many contemporary styles, vowels are formed in a way that creates a brighter sound compared to classical singing. This is particularly true of mix belt in musical theatre, but pop/rock also tends to use brighter vowel production. Nonetheless, in most contemporary styles the degree of brightness is an artistic choice; all singers should know how they can vary vowels to accomplish their artistic goals. The chart below illustrates how female mix belters often approach this problem. (Chart based on data from Story, Titze, and Hoffman, 2001.)

Brightening of vowels is accomplished by, among other things, less rounding of the lips (particularly important for [u] and [o]), generally more elevated tongue with a more forward tongue arch for all vowels, and a larger mouth opening, particularly for "ah." 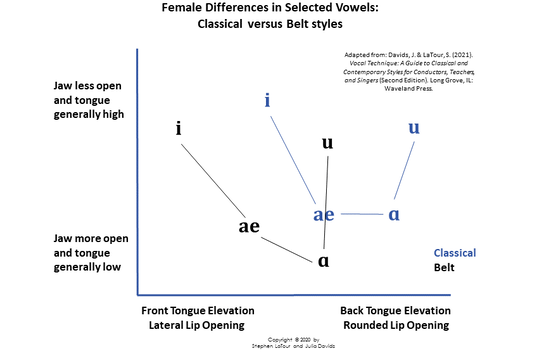 The classical vowel spectrum chart is available free of charge as a PDF for instructors and conductors in both large (24x36 inches) and small (8.5x11 inches) formats. Just make a request on the Send a Question form under the Q & A tab, specifying the desired format and maximum number of copies that you wish to print. You will receive a PDF file and a license agreement in your name.

Some of the additional topics covered in Vocal Technique